Get free advice on your clutch related issue!

So you’ve been asked to replace your clutch assembly. Or perhaps you’re having trouble operating your clutch, which was doing absolutely fine until sometime back. Either way, read on to find out all about the clutch, and how you can keep your clutch replacement costs in control.

What is a clutch? 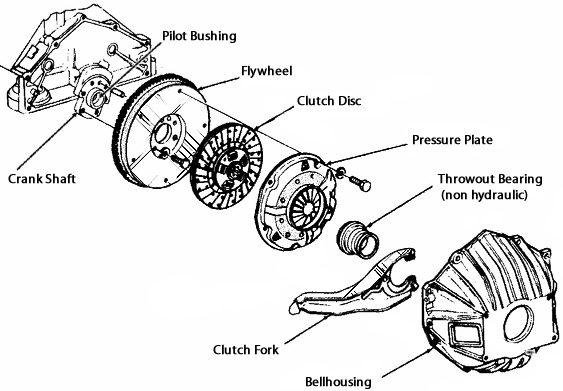 Remember that during normal operation, the engine is always spinning. In other words, we want to disconnect, reconnect, or gradually reconnect a spinning engine to the transmission, depending on our driving needs. When referring to the ‘clutch’, we’re usually referring to the ‘clutch assembly’. An ‘assembly’ consists of more than one part – it is a set of parts that work together to achieve a certain function.

Why do cars need a clutch?

Imagine if the engine were to be always connected to the transmission via a set of gears. What would have happened when you started the engine? Since ‘spinning’ the engine would mean turning the wheels as well, because they are always connected, the starter motor would have had to lug the car forward each time you started the engine! That would certainly have damaged the starter after a few such starts. Also, when you wished to change gears, say from the first to second, or from first to reverse, without a clutch to separate the engine from the transmission, you would have heard a grinding noise each time you tried to shift the transmission from one gear to the other! That would have damaged the gears very soon! Note that why cars need a gearbox with more than one gear in the first place is a different topic, and we’ll save that for a difference article.

So now we know why there is a need to disconnect the engine from the transmission, to be able to drive a car. The mechanism that does that simple yet critical task, is called the clutch. Let’s now move on to understand where the clutch assembly is located in your car.

Where is the clutch assembly located?

The clutch assembly is sandwiched between the engine and the transmission (or the gearbox), as illustrated below: 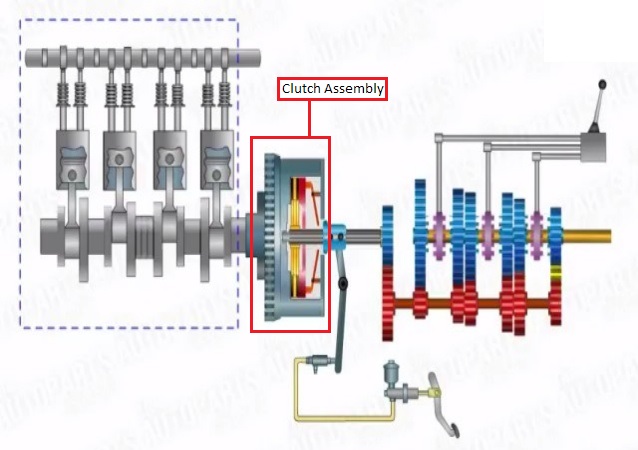 Visually inspecting the clutch assembly requires opening up the assembly itself, and is classified as a job involving ‘major labour’ at most service stations. You cannot get a view of the clutch assembly by looking down the engine compartment or by merely raising the vehicle up on a hydraulic lift. One way to save money then is to find out whether you need a clutch replacement without opening up the clutch assembly. We’ll get to that further ahead in the article. Before that, you will want to know whether your car employs a ‘cable clutch’ or a ‘hydraulic clutch’. Hydraulically assisted clutches utilize hydraulic assistance from the engine, and thereby reduce the effort required to operate the clutch pedal.

What’s the difference between a ‘Cable Clutch’ and a ‘Hydraulic Clutch’? 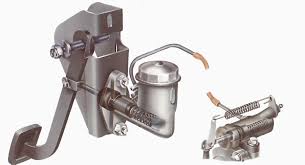 What are the key parts in a clutch assembly?

The clutch assembly consists of the following components. If you find it difficult to comprehend as you read the component descriptions, we recommend you jump to the subsequent section (How does the clutch assembly work?) and watch the video first, and then come back to read this section:

How does the clutch assembly work?

How something works is best explained by a video rather than text. The following video is highly recommended if you want to understand how the clutch works in reasonable detail:

How to save on clutch replacement costs?

When does the clutch assembly need a replacement?

Does the entire clutch assembly need replacement at once?

If any of the symptoms we talked about in the previous section (When does the clutch assembly need a replacement?) appear, then the entire clutch assembly must be replaced, with the exception of the flywheel. The flywheel must be inspected for wear, and replaced if it is worn out.

But still, why replace all components at once? That’s because the clutch assembly is an intricately put together mechanism where all its different components function with millimeter level precision, and replacing just one part usually results in repeat issues, which eventually force replacement of the entire assembly.

However, there are certain conditions in which you might be able to avoid replacing the entire assembly. You must rule out these working with your service center before you give a go ahead for clutch assembly replacement:

It is often found that in addition to the root causes listed in this section, an inspection of the clutch assembly reveals that the core clutch components are also worn out, and need replacement. Only a logical troubleshooting approach can lead to accurate root causes.

How long does it take to put in a new clutch?

How many kilometers does a clutch last?

Predicting how long a clutch will last is like solving a complex equation with lots of variables. Any of those variables can make a big difference in how the equation is solved. Clutches can last as much as 1,00,000 kms or wear out at as little as 30,000 kms. The kilometers that you can extract from your clutch purely depends on driving conditions and driving habits.