When an issue arises with your anti-lock brake system (ABS), a corresponding light will illuminate on your dashboard. The light will display as the acronym “ABS.” 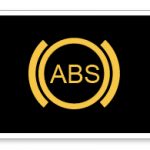 How the ABS system works:

Your ABS exists to keep your car from skidding dangerously during braking. It is an automated safety system that recognizes when your wheels stop rotating (while your car is still in motion) and releases brake fluid pressure, allowing the wheels to continue to rotate. This stops your car from locking up and skidding uncontrollably, and returns the control of the vehicle to you.

Like most systems in your vehicle, your ABS can falter, and you’ll want to resolve the issue as soon as it does.

Common reasons for this to happen:

When the wheel speed sensor alerts the ABS that the wheels are moving at different speeds, a hydraulic valve is responsible for releasing, or increasing, the brake fluid pressure to prevent the wheels from losing traction with the ground. Like all pumps and valves, those connected to the ABS are liable to become damaged and unresponsive. This may be due to internal wear typically from dirty brake fluid.

Corrosion on the ABS module can keep information from being relayed between the wheel speed sensor and the ABS. Corrosion is a relatively common issue, and one that can cause problems in the aforementioned wheel speed sensor wires. Even a small amount of corrosion can cause enough resistance on the wires to keep the system from working. In less common instances, the computer in the module can fail and need to be replaced.

The ABS relies on fluid to help regulate pressure. If the ABS fluid reservoir is low, or if there is too much air in the system, then the ABS will not be able to do its job.